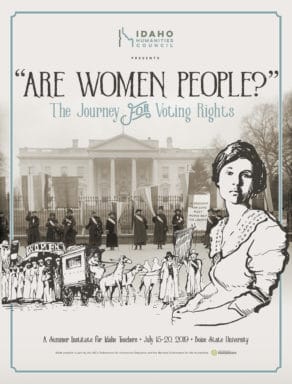 As the nation prepares to commemorate the centennial of the 19th Amendment, the Idaho Humanities Council will offer three special evening programs exploring the topic “Are Women People?” The Journey for Voting Rights on July 15th, 16th, and 18th at Boise State University’s Student Union Bishop Barnwell Room. The public programs are part of a weeklong institute for Idaho teachers which examines not only the history leading up to the passage of women’s voting rights, but also voting rights following the 1920 landmark event.

Though part of the institute, the following lectures are free and open to the public: 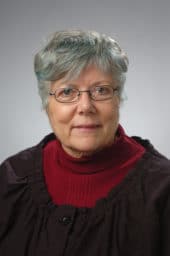 Sally Roesch Wagner, “So You Thought You Knew About Women’s Fight for Women’s Rights”

Wagner will deliver the keynote speech examining struggles leading up to the 19th amendment, including women voting in the colonies, fights for equal pay for equal work, demands for reproductive rights and an end to sex trafficking.  In the institute’s central text which she edited, titled The Women’s Suffrage Movement, Wagner shakes up the narrative about the women who made the movement possible with a collection of letters, speeches, and news reports from nearly a century of activism.  Featuring writings by well-known suffrage leaders like Susan B. Anthony and Elizabeth Cady Stanton alongside largely overlooked African-American suffragettes, like Ida B. Wells and the Forten sisters, Wagner’s book empowers readers to remember and learn from the stories of their fierce foremothers.

Awarded one of the first doctorates in the country for work in women’s studies (UC Santa Cruz) and a founder of one the first college-level women’s studies programs in the United States (CSU Sacramento), Sally Roesch Wagner has taught women’s studies courses for 50 years. She is editor of the intersectional Women’s Suffrage Anthology (Penguin Classics, 2019) and currently serves as an adjunct faculty member in The Renée Crown University Honors Program, Syracuse University and the St. John Fisher Executive Leadership Program. 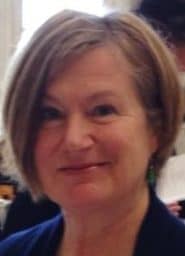 Susan Swetnam, “Tools for the Journey:  How Women’s Clubs Fostered the Suffrage Movement Nationally and in Idaho”

Swetnam will deliver a talk, exploring the national and Idaho women’s clubs movement.  She notes that while the organizations were not explicitly feminist or overtly dedicated to women’s rights, participating in them provided attitudes and skills that proved essential in the fight for suffrage, accustoming women to civic activism, research, and public speaking.  She will focus on the stories of particular women’s clubs in Idaho and the important work they accomplished.

Susan Swetnam taught in ISU’s Department of English and Philosophy from 1979 until her retirement in 2013. Over the years she has authored numerous articles and seven books, including collections of personal essays/memoirs, most recently A Season of Little Sacraments (Liturgical Press, 2016) and Books, Bluster, and Bounty (Utah State University Press), which won the Idaho Library Association’s award for Idaho Book of the Year in 2012.  On the national level, she has served as a consultant and grant reviewer for the National Endowment for the Humanities, and as an evaluator of humanities programs in several other states. A former IHC board member, Swetnam received IHC’s 2016 Outstanding Achievement in the Humanities Award.

Adler will present a talk examining the historic fight waged by women since the dawn of the republic to enjoy constitutional status, access and the power of voting.  Securing the right of women to vote represented one of the greatest story lines in the evolution of American Constitutionalism.  A nation that denied the franchise to half of its population mocked democratic values and the principle of equal protection of the law.  Adler’s presentation exploring the ratification of the amendment emphasizes how winning rights in America requires persistence.

David Adler is President of the Alturas Institute, a non-profit organization created to advance American Democracy by promoting the Constitution, gender equality, civic education and the equal protection of the law.  Adler has lectured nationally and internationally, and has taught courses on the Constitution, the U.S. Supreme Court and the Bill of Rights at all three Idaho universities. He held the Andrus Professorship at Boise State University, the McClure Professorship at the University of Idaho, and held a joint appointment in the College of Law and the Department of Political Science.  Previously, he was Professor of Political Science and Director of the Center for the Constitutional Studies at Idaho State University. He remains an Adjunct Professor of Law at the University of Idaho College of Law.  As a member of the Idaho Humanities Council’s Speaker’s Bureau, he lectures often on the Constitution, the Supreme Court, the Presidency and the Bill of Rights.  He was the recipient of the Idaho Humanities Council’s 2010 award for “Outstanding Achievement in the Humanities.”

The Idaho Humanities Council offers weeklong summer institutes for Idaho teachers every year, exploring different topics and disciplines of the humanities and covering lodging, meals, texts, and other expenses for Idaho teachers to attend. Past institutes have explored the presidencies of Thomas Jefferson, Abraham Lincoln, and Lyndon Johnson, Native American literature, the works of John Steinbeck, Mark Twain, Willa Cather, Wallace Stegner, and Ernest Hemingway, the history of the Cold War, the history of the Supreme Court, American Roots Music, Idaho History, and many other topics.  Teacher institutes are supported by IHC’s Endowment for Humanities Education and the National Endowment for the Humanities.

For more information contact IHC at (208) 345-5346; or check updated information at www.idahohumanities.org.