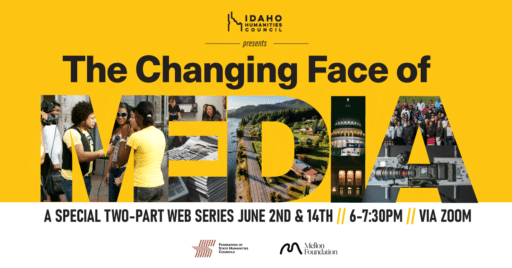 Boise, ID, May 11, 2022 - The Idaho Humanities Council (IHC) invites the public to attend a special, two-part web series titled “The Changing Face of Media” held on June 2nd and 14th from 6-7:30PM (MDT). Idahoans will have the opportunity to join national and regional journalists for two virtual panel discussions on the changing face of media and the essential role that journalism and the humanities play in creating an informed citizenry.

Both panels are free to attend and will be simulcast in Spanish and American Sign Language.

The first Changing Face of Media panel on June 2nd features Maria Hinojosa, Anchor and Producer for Latino USA and CEO of Futuro Media. Hinojosa will appear with journalist Mark Trahant, editor-at-large for news outlet Indian Country Today.  Hinojosa and Trahant will discuss the theme of “Why Do We See Media as Polarizing?”

Hinojosa and her team of editors and producers at Futuro recently received the 2022 Pulitzer Prize in audio recording for their seven-part podcast series called "Suave." As Anchor and Executive Producer of the Peabody Award-winning show "Latino USA," distributed by PRX, and Co-Host of Futuro Media’s award-winning political podcast "In The Thick," Hinojosa has informed millions about the changing cultural and political landscape in America and abroad.

Under Trahant’s leadership, Indian Country Today launched the first national daily newscast available through stations in the PBS network. The digital platform reaches more than 700,000 people each month. Trahant is the leader of The Indigenous Economics Project, a comprehensive look at indigenous economics, including the economic impact of climate change. Trahant is a member of the Shoshone-Bannock tribes.

“Both Hinojosa and Trahant are accomplished veteran journalists and incredibly engaging speakers whose ability to connect with people on this important topic will be of great interest,” said IHC Executive Director David Pettyjohn. “It’s also a very unique opportunity to field questions with a Pulitzer Prize-winning journalist so closely on the heels of her award.”

The second Changing Face of Media panel on June 14th is titled “The Changing Face of Media in Idaho.” This panel will feature a discussion between Christina Lords, editor-in-chief of the Idaho Capital Sun; Don Day, founder and publisher of BoiseDev; and Clint Schroeder, publisher for Hagadone Media Group (Coeur D’Alene Press). The panelists will discuss how both local media and journalism are currently changing and evolving in the 21st Century.

“We are thrilled to explore such a relevant topic as it relates to Idaho in particular, and all three panelists bring a unique perspective through their backgrounds and current roles at newer and established news outlets serving communities across the state,” said Pettyjohn. “The virtual format also broadens our reach with humanities programming, and we’re excited to field a City Club-type format on a statewide scale for a bilingual audience.”

Participants must register to receive a Zoom link prior to each event. The recordings of the English and Spanish-language versions of the panels will be made available for later viewing on IHC’s YouTube channel.

The registration link and Spanish-language descriptions for both panels are available on Eventbrite, through IHC's event calendar, and on the organization's Facebook page.