An Extended Romance: A History of Rexburg’s Romance Theater – Video Production
City of Rexburg, Rexburg, was awarded $2,000 to create a twenty-minute film documenting the history of the Romance Theater, a century old building which has acted as a cultural center for the city. The film will premiere in August 2021 at the Rexburg storytelling festival. The project director is Jed Platt.

32 Cells Fifth Anniversary Art Catalog and Research Compendium
The Idaho State Historical Society, Boise, was awarded $3,000 to create a book inspired by the 32 Cells art show at the old Idaho Penitentiary. The book will contain pieces from the art shows history which were all inspired by the lives of those incarcerated at the prison. To accompany these art pieces the book will also contain vetted biographical information and historical photos. The project director is Jacey Brain.

Basque Museum Interactive Entry Exhibit
The Basque Museum and Cultural Center, Boise, was awarded $5,000 for a new interactive entry exhibit that will act as a primer for Basque culture and history and show the basics for a more meaningful understanding of the full museum. The project director is Amanda Bielmann. 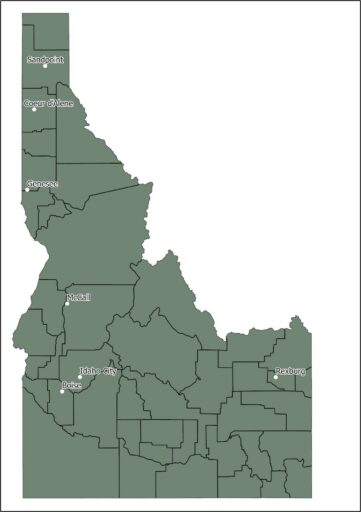 Historical Restoration of the Schick-Ostolasa Farmstead Barn Built in 1868
Dry Creek Historical Society, Boise, was awarded $1,500 to install educational signage and interpretive panels to help visitors to the Schick-Ostolasa barn understand its importance to agricultural history. The project director is Frank Eld.

Collaborating for Conservation: A Brief History of Morley Nelson and Idaho Power (Exhibit Signage)
The Peregrine Fund, Boise, was awarded $2,500 for an exhibit in collaboration with Idaho Power. The exhibit will focus on the history of Morley Nelson’s involvement with Idaho Power to create an informed utility infrastructure design, which reduced bird electrocutions worldwide. It also aims to foster exchange of ideas and how humans interact within our environments. The project director is Tate Mason.

“Breaking Hate” Presentation with Author Christian Picciolini
Human Rights Education Institute, Coeur d’Alene, was awarded $4,500 to host a month-long series of programming around the book Breaking Hate: Confronting the New Culture of Extremism by Christian Picciolini. The events will include focus groups, community conversations, classroom introductions, and an author talk. This program will also bring in local experts and historians to present a visual exhibition in the HREI gallery. The project director is Jeanette Laster.

Voices of the Wild Earth: Planning Grant for People of the Salmon and People and Trees
The Idaho Mythweaver, Inc., Sandpoint, was awarded $1,000 to help plan a radio/podcast project, which will be called “People of the Salmon.” It will include exploring not only the important return of wild ocean fish runs in the Columbia River system to the Wallowa mountains and valley, but also spotlighting the people who first called this northeast Oregon region home but were forcibly removed—the Joseph Band of Nimi’ipuu, or Nez Perce people, the first people of the Wallowas. The project director is Jane E. Fritz.

Looking Ahead, Conversations on Aging and Dying
Renee Silvus, McCall, was awarded $1,000 in collaboration with multiple organizations in McCall for a winter series on aging, death, and dying based in McCall featuring local services, support, and facilitators. Topics will range from book discussions on Atul Gawande’s Being Mortal, writing through loss, to writing end of life stories. One of the goals for this series is to look beyond medicine for solutions on aging and death. The project director is Renee Silvus.

Digitizing the Letters/Journals Collection
White Spring Ranch Museum, Genesee, was awarded $960 to digitize letters and photographs, dating from 1862. The goal is to digitize 9,600 pages online for wider access and preservation. Students from Washington State University and University of Idaho will assist with this project. The project director is Diane Conroy.

The Next Deadline for IHC Grants:

The next deadline for major grant proposals is April 15, 2021 for the initial application, and May 17, 2021 for the final submission. IHC strongly recommends that prospective applicants contact staff to discuss their project ideas before completing proposals.  Grant guidelines and application instructions are available on IHC’s website at www.idahohumanities.org or by calling (208) 345-5346.