Thirty-five Idaho teachers attended the Idaho Humanities Council’s 2008 weeklong summer institute, titled ‘A Word for Nature’: Exploring Environmental Literature. Held July 13-19 at the College of Idaho in Caldwell, and supported in part by a grant from the National Endowment for the Humanities “We the People” program, the institute featured lectures and performances by scholars and musicians from several states. 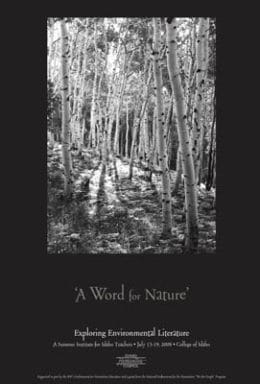 Many evening events were open to the public, including the keynote address by Scott Russell Sanders, author of A Private History of Awe, titled First Child in the Woods: On Learning to Love the Earth. Mark Raddatz presented Watch, Pray and Fight!, a one-man show highlighting John Muir, the founder of the Sierra Club and one of the first modern preservationists. Elizabeth Grossman, author of Watershed: The Undamming of America, presented a talk titled A Land Ethic for the Digital Age. Greg Keeler, Montana State University, presented an evening performance – Fish, Sheep, & Environmentalists – songs about the environment, environmentalists, anti-environmentalists, and other issues. Special afternoon presenters included Gary Eller presenting Idaho Environmental Protest Songs; Rick Johnson, director of the Idaho Conservation League, discussing its work; and Rochelle Johnson, College of Idaho, discussing a project she undertook with her writing students titled Rediscovering Indian Creek, centering on a local creek that had been paved over in the 1950s.

Comments from participants:I am overwhelmed, moved and forever changed by this experience. I will be applying in the future. At no other event have my eyes been so open, my brain so overloaded and my heart so provoked to action. – Amy Bellamy, Coeur d’Alene
Wonderful, inspiring, thought-provoking week! Thank you, thank you, thank you for an incredibly invigorating experience. – Toni Ansotegui, Boise
Everything was awesome! A life-changing experience. Only suggestion – do MORE of these! – Shane Brown, Jerome
The biggest strength of the institute was time to meet and talk to other teachers and to the scholars and presenters. The appreciation they showed for what we do in the classrooms as well as the exchange of ideas and thoughts has helped to renew my desire to excel in the classroom and my “spirit.” – Terry Vermande, Pocatello
The IHC summer institute is, without a doubt, among the finest educational experiences for us practitioners in the field. As always, it has been enlightening, inspiring, thought-provoking, and practical. The mix of scholars was exceptional. – Karen Christenson, Burley
This was an amazing week. The scholars were wonderful, accessible, friendly, and caring. Not only will this have a positive influence in my classroom, but on my life. – Tizz Miller, Bellevue