Thirty teachers attended the 2006 IHC summer institute focusing on the presidency of Abraham Lincoln.  Teachers studied  the evolution of Lincoln’s thoughts on the crucial issues that punctuated his troubled years:  slavery and the Emancipation Proclamation; raising troops, spending money, suspending the writ of habeas corpus while the Congress was in recess; exercising the powers of commander in chief during the Civil War; the role of religion in politics; and critical judicial rulings, including separation of powers and civil liberties issues.  Teachers evaluated the legacy of Lincoln, universally considered to be one of America’s greatest chief executives, and characterized as the nation’s “poet president.”

The primary texts were Lincoln’s Sanctuary:  Abraham Lincoln and the Soldier’s Home by Matthew Pinsker, Chair of Civil War History at Dickinson College in Carlisle, Pennsylvania, and Abraham Lincoln, Slavery, and the Civil War:  Selected Writings and Speeches by Michael P. Johnson.  Matthew Pinsker explored the “Lincoln Doctrine” and American constitutionalism in times of crisis in his keynote address on the first night of the institute. 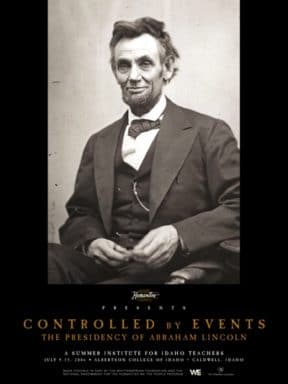 Special evening programs were also well attended by the general public.  These included the opening keynote address by Dr. Matthew Pinsker; a slide presentation on Lincoln, titled Abraham Lincoln:  With Charity for All  by Richard Etulain, Professor Emeritus, University of New Mexico; a Chautauqua presentation of Sojourner Truth by Kim Russell, Las Vegas, Nevada; Songs from a House Divided:  The Musical Legacy of the Civil War, by William Rossiter, Kalispell, Montana; and a presentation on Lincoln and Idaho by David Leroy, former Idaho Attorney General and Lt. Governor.

Evaluations of all components were very high.  Boise English teacher Toni Ansotegui summed it up nicely:  “What an invigorating week!  Through collaboration, lecture, and performance, this institute is everything that education should be.”