Thirty-four Idaho teachers attended the Idaho Humanities Council’s 2007 weeklong summer instit ute, titled New Harmonies:  Exploring American Roots Music.  Held July 15-21 at Albertson College of Idaho in Caldwell, and supported in part by grants from the Paul G. Allen Family Foundation and the National Endowment for the Humanities “We the People” program, the institute featured lectures and performances by scholars, musicians, and other presenters from across the country.

The institute included daily presentations by scholars and musicians examining the history of roots music and the cultural process that made America the birthplace of more music than any other place on earth.  The week immersed teachers of all disciplines in the study of music and its unique place in America’s culture and identity. 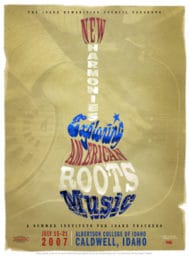