Thirty teachers attended the 2009 institute, Storm Center:  The History of the Supreme Court.  It featured an examination and discussion of the U.S. Supreme Court, including an historical overview of the development of the Court, its inner-workings, its relations with Congress and the Presidency, and the landmark decisions that have defined its role in American history.  The timely topic also provided an opportunity for participants to watch portions of the hearings for the recent Supreme Court nominee, Judge Sotomayor, observing first-hand the appointment process. 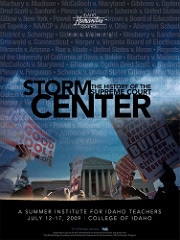 The lead scholars were David Adler, Professor of Political Science at Idaho State University, and Steve Shaw, Professor of Political Science at Northwest Nazarene University.  The keynote address was delivered by David O’Brien, author of Storm Center:  The Supreme Court in American Politics.  Other guest speakers included Nancy Kassop, State University of New York, The Supreme Court Since 9/11; Kerry Hunter, College of Idaho, Judicial Review in New Zealand:  A Comparison; Don Crowley, University of Idaho, The Roberts Court in the Obama Era; Marc Johnson, The Gallatin Group, Packing the Supreme Court:  FDR’s Biggest Political Blunder and the Gravest Constitutional Crisis Since the Civil War.  Participants also watched a two-part public television documentary companion piece to the Rosen text about the Supreme Court.  A highlight of the week was the guest appearance of Allen Derr, the lawyer who successfully argued the Idaho case Reed v. Reed about Equal Protection for Women before the Supreme Court in 1971.

This was a shot of intellectual adrenaline!  — Debbie Woodard, Idaho Falls
This program will benefit our students and in turn our society – every leader should support this program as a way to shape the future!  — Laurene Woolf, Rexburg
Excellent opportunity for making me “wake up” and be more “constitutionally” aware.  Enjoyed the collegiality and discourse and appreciated the chance for non-content social science teachers to be a part of the institute.  Adler and Shaw were insightful facilitators. — Ellie Ysursa, Meridian
First rate scholars all around – very impressed with their knowledge and patience – appreciate the sense of humor and all the preparation to make this a great experience for us. — Jeanne Allen, Burley
I’m on overload.  This conference was fantastic.  I was impressed by all colleagues with their patience and kindness.  The scholars were remarkable.  — Debi Moody, Culdesac
Outstanding educational opportunity.  All citizens need to take this course and become an informed “Constitutional Consumer.”