The Idaho Humanities Council’s 2017 weeklong summer institute, Wallace Stegner and the Consciousness of Place was held July 16-21 on the campus of Boise State University. Thirty-six teachers attended from schools across the state.

Teachers received the institute texts, including Stegner’s memoir of his youth Wolf Willow, his novel The Angle of Repose, and Where the Bluebird Sings to the Lemonade Springs, a collection of his essays about the West, and received an electronic compilation of other pertinent primary and secondary readings.  In addition to attending daily lectures and discussions, teachers attended special evening presentations, participated in a field trip to the Mary Hallock Foote site, viewed films, and shared ways of teaching Stegner’s works in the classroom.

Often referred to in his time as the Dean of Western Writers, Wallace Stegner (1909-1993) was a prolific novelist, memoirist, historian, journalist, biographer, teacher, and environmental activist whose work explored the American West. He once described the American West as the “native home of hope,” even as he persistently exposed the rough edges of its contested terrain.  Stegner ushered in a new era of western literature and history in the latter half of the twentieth century, disrupting both popular myths and academic traditions, and prompting new considerations of what it means to live well in the arid West.

Stegner founded the now-famous creative writing program at Stanford University in 1946, championed the writing of minority voices, and was the recipient of numerous awards, including the National Book Award and the Pulitzer Prize for fiction. 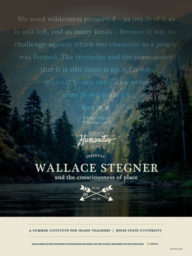 Institute scholars analyzed how Stegner’s work proposes new western identities and responsibilities.  Participants examined the relevance of his legacy to contemporary regional literature, conservation policies, and even popular culture. Scholars considered what kinds of aesthetics and ethics are advanced by Stegner’s work, how they describe a distinctly western consciousness, and how we think about stories of place, the environment, social justice, and politics in the West today. Participants explored a variety of Stegner’s writings and examined his teaching and activism.

Scholar presenters included Tara Penry, Professor of English, Boise State University, Jennifer Emery Davidson, Director of The Community Library in Ketchum and current Chair of the Idaho Humanities Council, Matthew Stewart, doctoral candidate in environmental history at Syracuse University, Richard Etulain, History Professor Emeritus, University of New Mexico, and Michael Branch, Professor of Literature and Environment at the University of Nevada, Reno.  Judy Austin led the discussion during the field trip to the Mary Hallock Foote site.  The keynote address on Sunday evening was presented by Sharon Butala, author of 18 novels.  She lived for 33 years in Stegner country and is the founder and twenty-five year member of the initiative to save the Wallace Stegner home in Eastend (called Whitemud) and to turn it into a retreat for artists.

This institute was exceptional! I learned a great deal and feel grateful to be included in an intellectually stimulating experience.

Thank you. It was a very instructive and enjoyable week. Teachers rarely receive such thoughtful and useful programming/ professional development. It means a lot that IHC provides this for Idaho teachers.

I had a great time and learned a ton. Scholars were first rate, personable, well informed. My fellow institute members were serious, well prepared and added to my understanding and experience.

I love attending this institute. I love delving deeply into a subject with highly intelligent scholars colleagues who push the boundaries of my knowledge.

Excellent program to provide encouragement, ideas, inspiration, and knowledge to teachers and the public.  I hope the program continues to grow.