Thirty-four teachers from around Idaho attended the Idaho Humanities Council’s 2010 weeklong summer institute, Why  Mark Twain Still Matters:  Exploring the Mississippi River Books. Supported in part by the IHC’s endowment for humanities education, a grant from State Farm, and a grant from the National Endowment for the Humanities “We the People” program, the institute featured daily presentations by scholars immersing teachers in the life and work of the American literary master.

Participants explored some of Mark Twain’s best known novels – Life on the Mississippi (1882), The Adventures of Tom Sawyer (1876), Adventures of Huckleberry Finn (1884), and Pudd’nhead Wilson(1894).  Twain is one of the most recognizable authors in American literature and his celebrity continues to grow one hundred years after his death.  In these river works, Twain discussed such issues as race, labor unions, war, gender, religious hypocrisy, mob violence, alcoholism, and the West.  Scholars also situated these works in the context of some of the most important historical events of the late-nineteenth century, such as the Civil War, Southern Reconstruction, the battle of the Little Big Horn, and the Plessy v. Ferguson decision of the U.S. Supreme Court.  Daily topics focused on Twain’s development as a writer as well as his greater cultural presence. 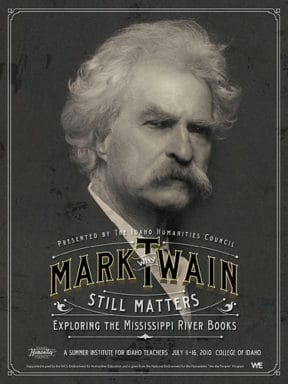 The public was invited to four special programs – a first-person portrayal of Twain by McAvoy Layne from Nevada; an historical perspective on Twain and the West provided by  Richard Etulain; David Adler from ISU presenting on Plessy v. Ferguson; and a first-person portrayal of Harriet Beecher Stowe and Willa Cather titled “Speaking of Twain,” by Betty Jean Steinshouer from Florida.