The IHC 2011 Summer Institute, Are You Now or Have You Ever Been…Fear, Suspicion, and Incivility in Cold War America, focused on the Cold War, with specific emphasis on the 1950s, in order to study its origins and legacy for domestic and foreign policy.  IHC hosted 35 participants.

The Cold War may have ended in the late 1980s, but it continues to cast a large shadow on scholars, policy makers, and citizens alike.  Topics investigated included the McCarthy Hearings and their impact on American constitutional law and civil liberties; Americans’ fears of Soviet missile technology and atomic capabilities; race, class, and gender implications of Americans’ post-WWII orientation toward privacy and security; and increased government spending on the military and weapons of mass destruction, among others.

The week included lessons on the popular culture of the 1950s, including how Cold War fears were interpreted in American literature, music, art, and film.  Participants also examined Idaho’s political history during this period, the implications of Cold War fears for American politics, and its lingering impacts. 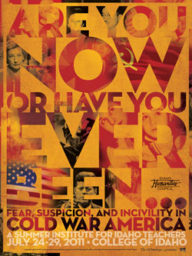 Texts included:  The Hawk and the Dove: Paul Nitze, George Kennan, and the History of the Cold War by Nicholas Thompson, Age of McCarthyism:  A Brief History with Documents by Ellen W. Schrecker, and Winning Is the Only Thing: Sports in America since 1945 by Randy Roberts and James Olson.

The teacher participants gave enthusiastic praise to the week.